It’s hard to make a statement much bolder or more dubious than the one painted on the wall outside Billy Boy: “FRESH CUT FRIES OVER 100,000,000 POTATOES A YEAR.” Much more modestly, the Doug-Out proclaims, “May Be The Best Hot Dog in Town.” Meanwhile, a brown and yellow hotdog stand in New Buffalo takes a different approach altogether: “WE HAVE BIG WEENIES”. If the contrast between these advertisements makes anything clear, it’s this: when you run your own hotdog stand, you call the shots.

Patty Carroll’s Hot Dog Stands series began in 1987 as part of the Changing Chicago documentary project which selected thirty-three photographers to document the city of Chicago as it existed in the late 80s and to serve as a time capsule preserving the city’s unique culture. Collected by institutions such as Art Institute of Chicago, Museum of Contemporary Photography, and Chicago History Museum, Rockford Art Museum is proud to present our entire collection of works from the Hot Dog Stands series for the very first time.

The photographs from Carroll’s Hot Dog Stands are truly less about food and location and much more about the people who populate those locations and eat those foods. As a synthesis of European immigrant cuisines, the hotdog became an icon of American culture and an emblem of the twentieth-century ideals of the “American Dream” and the “Melting Pot”. As a foodstuff with both a sense of humor and robust and complex history, they represent the entrepreneurial immigrant narrative, which posits that there is a place and a way up for everyone who is willing to work towards it.

Carroll’s large-format color photographs exist as a testament to a Midwestern cultural phenomenon. What began as a single image of an independent “mom and pop” fast food stand grew as her series developed into the composite image of a hotdog kingdom; a city peppered with small family-owned businesses. Whether closed for the night or open for the season, thriving or struggling, adorned with chipped paint or blazing neon, the vivid images in this exhibition capture a sense of tenacity and create a unique portrait of Chicagoland on the doorstep of the twenty-first century.

Since the inception of this series in 1987, thirty-five years have gone by, and Carroll’s hotdog stands feel deeply veiled in the mists of the past. Corporate expansion, gentrification, and the dawn of a new millennium have aged these images of proudly hand-painted eateries well beyond their years. But not so long ago, it was hard-earned word-of-mouth reputation and brightly-colored plywood signs flaunting cartoonesque menu items rather than online reviews and search engine optimization that attracted customers. Hotdog Kingdom offers an opportunity to dream of a not-so-distant past where hyper-commercial fast-food chains and pretentious “fine dining” establishments crumble under the sheer charismatic radiation of the Chicago hotdog stand. 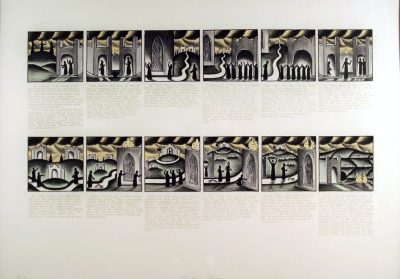